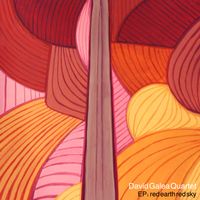 “Red Earth Red Sky” is the first single from David Galea’s soon to be released recording entitled “In the Blood” and features amongst others Australian vocalist Elly Hoyt. “In the Blood” is quite the departure from David’s earlier releases as it is predominantly a vocal album featuring various vocalists from with in the Australian music scene that he has worked with and admired, it also features a vocal track from David himself. Each of these tracks are original and have been inspired by either the Australian landscape or people that have influenced David’s life.
“Red Earth Red Sky” was written and inspired by the north-western Queensland town of Cloncurry, some 1800 kms north west of Brisbane. The harsh and arid nature of the outback can easily over shadow the beauty that exists in these areas, only by taking time and living in Cloncurry for over twelve months was David able to realise the natural beauty that exists in the outback. When light strikes the various elements of the outback landscape, things like the weathered ground, rocky outcrops and the vast sky at different parts of the day it creates an ever changing and developing story that must be scene to be believed. “Red Earth Red Sky” is a musical attempted to try and capture some of these elements and present them using shifting melodic lines, pointed lyrics, dynamics and percussive texture with in the modern jazz context.
“Red Earth Red Sky” personnel
Guests:
Elly Hoyt: vocals